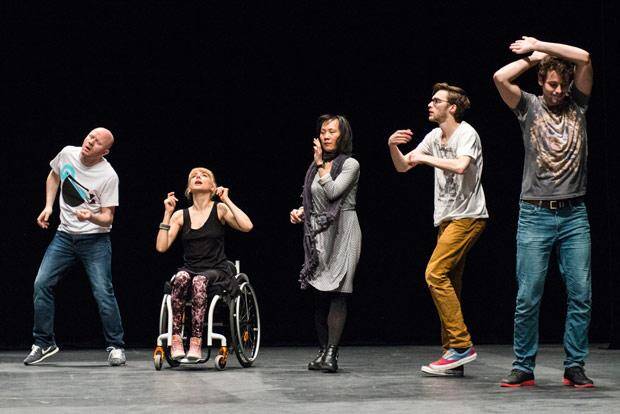 Candoco Dance Company & Jerome Bel “The Show Must Go On”.

Its 7.30pm on Saturday 21st March 2015 at Sadler’s Wells Theatre, the stewards usher the last few stragglers into their seats and the usual background murmur of anticipation that fills a theatre is brought to silence as the lights go down and ‘Tonight’ from West Side Story starts playing. The audience acknowledge their code of conduct; they’re to be silent and engage. Accepting the first track as the ‘overture’ the audience are relaxed and dreamy as they honour their role of no responsibility but to watch, and as the track comes to an end there is a feeling of expectation for the show to properly begin. But a rustle from the front of the auditorium disrupts this mood as a DJ takes out a CD and replaces it with another one. He is not rushed and does it in his own time. All eyes are on him and eventually ‘Let the sun shine in’ from the musical ‘Hair’ kicks in and a sigh of relief is felt from the audience as they return to being anonymous once again …or so they think!

Candoco Company present a restaging of Jerome Bel’s ‘The Show Must Go On’ with a cast of 20 amateur and professional performers. The work challenges an audience’s acceptation of theatre and expectation of themselves. As an audience member you accept anonymity in a theatre and find contentment in being lost in the world on stage, but Bel turns this ideal on its head and makes the audience question their social position.

Bel presents a soundtrack of 18 popular songs literally. The Macarena is danced as you would see it at a wedding, haphazard and sometimes out of time, re creating a memory most can relate to and enjoy watching with nostalgia. Stings ‘I’ll be watching you’   takes the lyrics as they are and sees the performers stare out to the audience for the entirety of the track as the house lights are bought up seeing the traditional position of audience and performer reversed.

Candoco Dance Company & Jerome Bel “The Show Must Go On”.

Bel says ‘The audience should recognise themselves on stage’ and he does this by making the content recognisable. It is presented in a very simple form, just a cd player, a blank stage, a collection of cliché music, and a cast of relatable people.  But it is the integrity, commitment and feelings provoked by this equation of recognition that evokes genius and is why Candoco and Bel deserved the standing ovation they got from a packed out Sadler’s Wells Theatre.

For more information on the rest of the tour visit www.candoco.co.uk